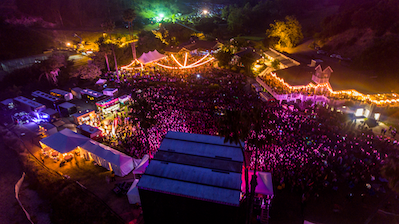 When Bruce Flohr arrived at Cal Poly as a freshman in 1984 the world of music was exploding around him.  Synthesizers and drum machines were finally becoming more accessible, and the new sounds they produced not only helped define the music of the 80’s, they changed the face of music forever.

Bands like REM, Culture Club, Run DMC, Metallica and Depeche Mode were also still new artists on the music scene, and Jane’s Addiction and A Tribe Called Quest hadn’t even officially released their first albums yet.

But if you are a college kid in a small town on the central coast, how do you even find out about these new bands and the changes in music, or even see them play live?  Enter Cal Poly’s radio station: KCPR.

It All Started with A Radio Station

In the 1980’s San Luis Obispo was not much more than a stop for touring bands between San Francisco and Los Angeles, and without a fan base or right size venue to play there really wasn’t a reason to do more than pass through.

What KCPR did in the 80’s was give bands that reason to stop and tour in SLO.

Back then there were no streaming platforms like SoundCloud, Spotify, or even YouTube for new artists to share their music.  They had to rely on relationships with radio station DJs to play their tracks, and tour constantly just to build a grassroots fan base.  KCPR understood this relationship, and knew that if they could build the fan base the bands would come.

As a volunteer at the radio station, Flohr and his colleagues made a concerted effort to discover as much new music as they could, sharing it with anyone that would tune into the radio station.

Listeners became fans, and turned to Boo Boo Records to purchase the new music they loved. Record companies started taking notice of the emerging fan base and record sales for new artists, and put SLO on the map of potential tour locations.

The problem was SLO still wasn’t very big, and just didn’t have the infrastructure to support a robust live music scene in the 80’s.  Besides simply not having many venues for live music at the time, there just weren’t the resources to support artists (and the fans they brought with them) as they traveled through.

What Flohr and KCPR discovered was that they had to find the right band at the right time in their career in order to convince them to come to SLO.  Bringing A-list talent to the area just wasn’t possible yet, but they had laid the groundwork for the future and shown the county what could be done.

Today San Luis Obispo County has one of the most vibrant music scenes (especially for a county of its size), and it is because of their efforts around the three most important elements in bringing live music to town: having music venues of all sizes, incredible accommodations, and the support and resources for the bands and fans they bring to town.  It also helps that SLO County happens be a little bit of paradise here on the Central Coast!

The emergence of these live music venues means that artists now have places to play at most stages in their career, from the 300-person capacity bar to the 14,000-seat amphitheater, and keep returning to a county where they developed a deep fan base that will turn out for their shows every time.

More recently San Luis Obispo County has also seen the construction of several new hotels throughout the county, from The Piccolo and The Cheval’s expansion in Paso Robles to the new Hotel San Luis Obispo, Hotel Cerro, and the Kinney Hotel in SLO, which are critical in supporting SLO’s music scene.

Not only do traveling artists need places to stay, the fans that come to town because of those shows do too.

Along those lines, in the last 10 years there has been a rejuvenation of the food scene in SLO County that further supports bringing live music to the area.  Places like Six Test Kitchen in Paso Robles, Mestiza in SLO, and Ember in Arroyo Grande elevate and enhance the experiences artists can have while touring here, and give them something to look forward to when coming back.

The support and resources for bands are artists are also now in place, and thanks to the infrastructure they have built the entire county as seen a surge of great music coming through the area.  Just this year Miranda Lambert, Earth Wind & Fire, Gabriel Iglasias, and Willow Smith toured through SLO, and Sure Sure will be here on October 24!

With the invention of streaming platforms it would be easy to think a local college radio station doesn’t have as big a role to play in influencing the music scene here in SLO County. It’s because of those streaming platforms, though, that their role has become even more critical today.

Listeners today literally have thousands of new artists adding music to YouTube, SoundCloud, Spotify, and a host of other platforms daily.  So how does a fan of music in any town sort through the noise? Their local independent radio station.

Bruce Flohr eventually became the Radio Director at KCPR before moving to Los Angeles where he now manages bands through Red Light Management.  Today he is still an advisor at KCPR, and has started to see the cycle he helped start in the 80’s begin all over again.

KCPR has rejuvenated itself in the last few years, and is again playing and promoting independent bands, introducing new sounds and music to listeners throughout the county.  Instead of record sales though, it’s the number of downloads and streams that counts and helps influence new artists to come this way.

That is exactly what happened with Sure Sure, an art-pop band from East Los Angeles.  With 30-million streams of their music and the release of their second album, “What’s It Like”, Sure Sure is a big band to come through SLO County, and it is in large part because of the known fan base here.

Sure Sure will be playing at SLO Brew Rock on October 24, and not for the first time.  This will actually the fourth time they’ve been to SLO, and hopefully not their last.

As bands like Sure Sure continue to grow in their career they can keep coming back to SLO because they’ll always have a place to play, stay, and eat.  And as Flohr so perfectly put it at the end of our conversation, “You can’t take away live music”.

Nicole Grant grew up in Bakersfield, CA, but spent her childhood visiting the Central Coast as often as she could. After graduating with her degree in elementary education from Cal State Bakersfield, she and her husband moved to Seattle where they spent the next nine years. Nicole ended up working for the Bill & Melinda Gates Foundation while in Seattle, where she supported the Human Resources and Education teams before returning to California. Since her return Nicole has worked at Cal Poly, Cuesta College, and MINDBODY, contributing her technical and operational skills in support of students and her community. Today she runs San Luis Obispo Guide full time, and is excited to share all the incredible people, places, and products that make SLO County so special.

On February 14, Paso Robles will see its very first beer garden - The Backyard…

National Drink Coffee Day is Sunday, September 29! There will be lots of national chains…